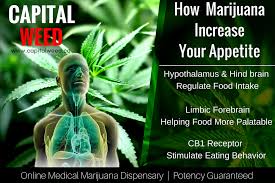 Finding the desire to eat is difficult is always difficult especially for patients battling cancer and those with HIV-related anorexia know. Certain medications even suppress the appetite of some patients. Conditions such as chronic pain and even Nausea and vomiting caused by some medications and conditions can also interfere with user’s appetite. Meal time can be distressing for patients living with these conditions. It’s enough to leave them wondering, “what medication increases appetite?” Medical marijuana is one of the most reliable medications for boosting appetite.

Medical Marijuana can Cause “the Munchies”

One of the side effects typically associated with recreational marijuana use is hunger, colloquially termed “the munchies.”  This can be explained by the fact that THC, one of the active cannabinoids in marijuana, can boost appetite. Several clinical studies have been conducted on this effect for some time, seeking to determine how medical cannabis could be used to help cancer patients during treatment. Research suggests that medical cannabis strains with a high THC content usually boost appetite.

The Science behind Marijuana and Hunger

Hunger is regulated by certain processes in the body. After eating, the body produces a substance known leptin, which can suppress the appetite. A person becomes hungrier as leptin decreases. If another medication or a physical condition causes an increase in leptin or leptin levels to drop more slowly, the person won’t feel hunger. For patients with HIV-related anorexia, for example, the neurons slow down or fail to send the message of hunger altogether. These Neurons in the brain are also responding for sending signals to tell you that you are full after having eaten. The introduction of THC into the system slows down the neurons and they fail to send the message. THC also appears to inhibit the production of the appetite-suppressing leptin.

In essence, medical marijuana tricks your brain into telling you that you’re hungry which can help them maintain nutrition for patients suffering with lack of appetite during their illness.

Medical marijuana also seems to assist by increasing the appreciation of food. Not only does the user feel hungrier, but food tastes better and is more satisfying when using medical marijuana.  This is explained by fact that THC enhances the sensory system, making the taste buds more engaged. Research suggests that THC also signals the brain to fuel this increase in food desirability which is helpful for patients who are suffering from a suppressed appetite, since it encourages them to eat, makes them feel hungrier, and meals are more enjoyable as well.

Marijuana assisting with Nausea and Vomiting

Another area medical marijuana can help with is nausea and vomiting, symptoms usually associated with a wide range of medical conditions and even side effects of certain medications as well. Nausea and vomiting after eating usually creates incredibly strong food aversions. This is a biological mechanism designed to protect people from eating poisonous or spoiled foods. If someone eats something and he/she doesn’t feel well afterwards, he/she is likely to avoid that food in the future.

Food aversions may be particularly strong and may extend to a wide range of foods which can be very problematic particularly problematic for cancer patients, who may be very ill after therapy. Some clinical evidence suggests that manipulations to the endocannabinoid system regulate vomiting and nausea. Medical cannabis can help alleviate these symptoms by activating CB1 receptor sites of the endocannabinoid system which function in preventing food aversions from developing.

Is Marijuana Right for You?

There are several causes of appetite suppression, and medical cannabis is being investigated as a potential aid for these patients. Research suggests that it may assist those who have eating disorders, as well as people whose medications suppress their appetite.

What Happens When You Mix Cannabis in Your Coffee

Passing a Medical Exam for A New Job If You Smoke Weed.

The Origins and Potency of Trainwreck Marijuana Strain (2020 Review)